In the pages of a leather album
between moth-eaten sheets
of rice paper, Mother rests on her belly,
in a photo from 1952. She gazes
in sepia and gray, five months old, wearing
just her birthday suit. An heirloom
glistens around her neck - a string of
gold beads like jasmine buds. Her ears
are adorned with matching studs,
and you can almost hear the jingling
of the bracelets on her dimpled arms,
the tinkling of the bronze prayer bell
she clutches in her cottony hands.

Five month old Mother in the vintage photo,
is an intact being. She doesn't fret yet
about the grape-black skin that drapes her.
The polar opposite of her own mother, who
is sandalwood-rose, Mother is a monsoon nimbus -
the lone inheritor of the atavistic trait
that gives her her onyx hide.

Five month old Mother has no inkling
of the uncharitable barbs about her coloring
that will stalk her throughout her life -
how they will lacerate her at every juncture
from the moment she comprehends language.
For now she beams and tosses her pinwheel curls,
eyes gleaming like mahogany moons.

For a moment the portrait breathes.
Five month old Mother seems to blink
as the beginnings of a smile distends
her lips. In this precious sliver of time,
her innocence shines untainted - no one has yet
planted the poisonous lie within her
that she’s some lesser breed of human.

Author's note: I wrote this poem after my mother sent me a photo of her as a baby. My mother is a black-skinned woman of South-Asian descent. In many South-Asian communities, black-skinned women are shunned. Throughout her life, she was made to feel like she was not good enough, because of her skin colour. My poem references this colorism. When I saw my mother's photo, I was overwhelmed. I thought she was incredibly beautiful. The innocent baby in that photo was so oblivious to how she would be treated.

Oormila Vijayakrishnan Prahlad is an artist, poet, and pianist of Indian heritage from the Middle East. She holds a Masters in English. Her recent works have been published in Neologism Poetry, The Ekphrastic Review, Nigerian Voices Anthology, The Maier Museum of Arts Journal of Ekphrastic Poetry, Poetica Review, Silver Birch Press, and several other print and online literary journals and anthologies in the US, UK, Canada, Australia, Africa, and Europe. Her poem "Mizpah" was awarded an honorable mention at the Glass House Poetry Awards 2020. She is the co-editor of the Australian literary journal Authora Australis. 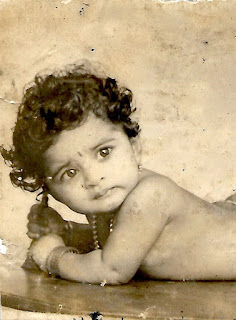 Posted by Beate Sigriddaughter at 01:00