Excerpt from the novel Who Saw the Deep 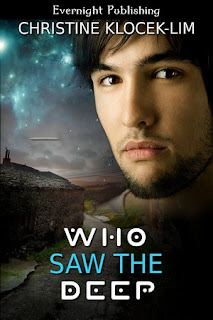 (Context:
When Noah moves back home after grad school, he doesn’t expect a simple handyman job to turn deadly. Amelia seems like a sweet old lady with a run-down house, but appearances can be deceptive. When an alien ship lands in her woods, Noah discovers that everything he believed about Earth and human civilization is wrong.
Amelia already gave her heart to one man—does she really want to let another one inside? Even though Noah is everything she ever wanted, can she really trust him? He seems like a good person, but her family’s genetic legacy is more important than romance.
When all their secrets are laid bare, Noah and Amelia discover that the survival of their species may be more dependent on love than either could have imagined. Civilization endures because of anonymous acts executed by ordinary individuals. And love, especially in the face of betrayal, is worth everything.)

Who Saw the Deep was an Amazon Breakthrough Novel Award (ABNA) 2012 Semi-Finalist Winner and is classified as Romance, Suspense, Paranormal, Sci-Fi, Mystery

Posted by Beate Sigriddaughter at 13:19